Thanks to the Pacifica Tribune for the recent feature for RR, True Concord Voices & Orchestra and Stephen Paulus after the recent GRAMMY win for Paulus’s Prayers & Remembrances:

This record is not Reference Recordings first Grammy (they received a Grammy in both 2011 and 2004), and it was not their first walk down the red carpet. This year’s Grammys were hosted at Staples Center in Los Angeles and the Reference Recording team, all dressed in formal attire, enjoyed the evening’s events from their seats in the eighth row. There were numerous other invitation-only parties and events, all of which they attended, including the San Francisco Chapter Grammy Nominee Celebration.

“It was all very elegant and fun,” Martin said. “This is True Concord’s first internationally released CD and we are so honored they trusted us with this project.”

Read the full feature on www.pacificatribune.com 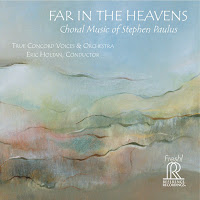