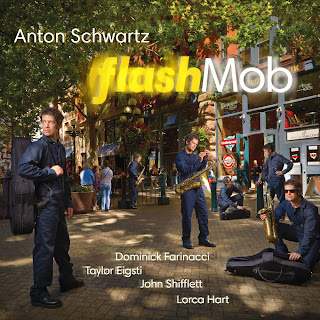 “Blazingly hot stuff throughout, Schwartz and company serve up some of the best ensemble playing around and make it sound way too easy. A winner throughout.”
– Midwest Record, (Dec 2, 2013)

“★★★★… Just about all of these songs have the kind of shapely themes you can imagine other players wanting to cover.”
– DownBeat (March 2014)

“Schwartz has a wealth of musical ideas and always backs them with a solid high wire tenor!”
– Jazzscene (January 2014)

“Bay Area tenor saxophonist Anton Schwartz’s latest CD is… a splendid outing shaped by his skills as a player and a composer.”
– Ken Franckling (Feb 2, 2014)

“If I had to use just one word to characterize this album, it would be “urgent;” whether the musicians are playing full speed ahead, or at a more leisurely pace, there is a sense of in-the-moment interaction which sometimes does not get captured on studio recordings such as this.”
– Louisville Music News (Feb 2, 2014) Martin Z. Kasdan Jr.

“Schwartz and his band are in full stride on this persuasive release, teeming with multicolored mosaics, vigorous soloing spots and strong compositions, radiating in a modern jazz delight that offers residual enjoyment on successive listens.”
– Glenn Astarita, All About Jazz (Feb 3, 2014)

Check out Anton Schwartz’ Flash Mob in Studio Master Quality at HDtracks. Easy to Download, Play and Enjoy. Use code Flashmob15 to get 15% off this title. Expires February 9, 2014. One time use. Apply at checkout.