The final album for our “Music for Independence Day” Series once again features the wonderful Dallas Wind Symphony, this time conducted by Jerry Junkin on the album, “Strictly Sousa!” 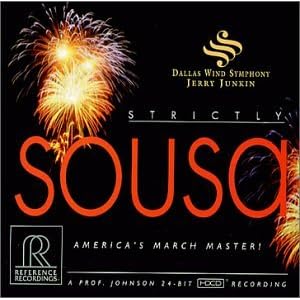 No marches are quite as inspired as those by America’s beloved March Master. Jerry Junkin leads the renowned Dallas Wind Symphony through the Constitution, the Declaration of Independence and the Bill of Rights of every windband! Recorded by “Prof.” Johnson in the big, bold acoustics of the Meyerson Symphony Center, this collectionof Sousa favorites and rarities qualifies as Essential Americana.